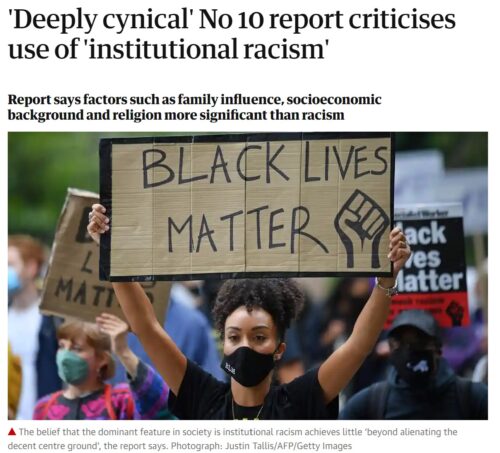 The Commission on Race and Ethnic Disparities have released their report on institutional racism. It claims that there is no evidence of institutional racism in the UK. And that other countries addressing their own structural racism should look to the UK as an example.

The Macpherson Report published in 1999 in response to the racially motivated killing of Stephen Lawrence defined Institutional Racism as:

“The collective failure of an organisation to provide an appropriate and professional service to people because of their colour, culture, or ethnic origin. It can be seen or detected in processes, attitudes and behaviour which amount to discrimination through unwitting prejudice, ignorance, thoughtlessness and racist stereotyping which disadvantage minority ethnic people.”

The Commission on Race and Ethnic Disparities report has a definition which is phrased.

“we have argued for the use of the term ‘institutional racism’ to be applied only when deep-seated racism can be proven on a systemic level and not be used as a general catch-all phrase for any microaggression, witting or unwitting.”

A master stroke at simultaneously being so specifically vague as to make the term disappear almost completely.

This country without an institutionalised racism problem;

I bring it back to children’s books because that’s where we focus on making a change.

But what they can do as they’re quietly installed in school library after school library all over the country is start giving children the foundational understanding of diversity they have been lacking. They can give them an innate sense and expectation of equality.

We don’t want to give it that power.

We need it to galvanise us all into action.

Our institutions are full of people and people have the power to change things.

Here are some things we can do.

Commit to your own personal anti racism journey. Head to www.novareid.com, buy Layla Saad’s book, Me and White Supremacy.

Support the Black Curriculum as they continue their work to decolonise the curriculum in schools all over the UK.

Diversify your own and your children’s bookshelves and make sure your school is doing the same.

1 thought on “Our thoughts on the Race Report”