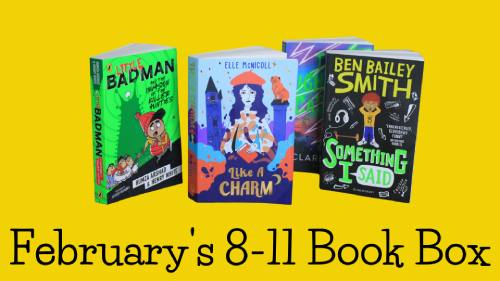 As children verge on pre-teens, it can become a little trickier to have a tab on what they are reading. Perhaps, they just want to be like every kid before them since the late 1990s and read Harry Potter after Harry Potter book. And that is what it is. Policing books only ever makes the forbidden books more exciting. However, a subscription to our book boxes can help expand your child’s minds to other options. We have a grip on new releases. We also have a grip on books that have diversity at their heart. February’s 8-11 book box is a prime example of this. 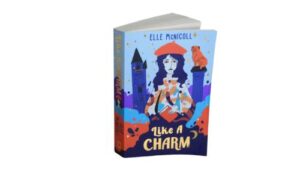 As recently as February 3rd, award-winning, best-selling author Elle McNicoll released her third book, Like A Charm. We’re so chuffed to have it in February’s 8-11 book box. Elle is known for transforming the 8-11 fiction landscape with her debut, Like A Spark. Like A Spark and Show Us Who You Are feature female autistic protagonists. Autistic protagonists have been sorely under-represented in children’s fiction (you can check out our list of books featuring them here). Elle is autistic herself and has been celebrated by the neurodivergent community (and everyone, really) for writing stories with neurodiverse characters.

This time, the protagonist has a diagnosis of dyspraxia. At the start, the Author’s Note says,

‘The protagonist of this story has been diagnosed with Dyspraxia, more formally known as Developmental Co-ordination Disorder (DCD). It affects motor skills and processing. I was diagnosed at the age of 9…’

Therefore, Like A Charm is an authentic representation of what it is like to have dyspraxia. This is vital because it means that every neurodiverse child reading this story has Elle to look up to. They can realise their dreams, just as she realised hers of being a writer.

For those that do not have dyspraxia, there is so much to learn. Whilst Like A Charm is not a story about having dyspraxia, it is evident how it affects Ramya Knox. For example, there is a scene where Ramya struggles with a steep staircase. Because of her messy handwriting, she has to attend Special Eds class. However, what the book makes clear is that it is not so much the symptoms of dyspraxia that makes Ramya’s life challenging, but the attitudes of those around her to her differences.

‘I’m sick of it because ninety per cent of what makes life harder comes from them, not me!’

Ramya is frustrated by how her parents and teachers are constantly trying to change her. She is not badly behaved: she’s just different. She wishes that the people around her would just let her be herself rather than try so hard to fit her into a mould.

‘I don’t like people. I don’t like company that isn’t my own. It baffles me; why does this school find that so troubling? I’m not spraying graffiti on the walls or ripping pages out of library books. So, I wish they would just leave me alone.’

In a remarkably child-friendly way, Like A Charm grapples with heavy topics in relation to how society can be so bent on “fixing” difference. At times, Ramya can come across as angry, but there is no real argument that she shouldn’t be.

‘My hands become fists. Special Needs. A phrase that makes me want to snarl.’

But Like A Charm isn’t just about dyspraxia. And that’s part of the beauty of it. Have you ever seen a girl with dyspraxia leading a magical adventure? I can’t say I have.

When Ramya’s grandfather dies, family feuds and mysteries start to unravel. Despite many warnings, Ramya is on a quest for answers.

It isn’t only her family that starts to unravel, but Edinburgh too. Edinburgh is an enigmatic place populated by Hidden Folk. The Hidden Folk are kelpies, hulders, fairies, and sirens. Some of them are kind; some of them have malicious intentions. They all protect themselves by wearing a Glamour. Only Ramya is able to see through the Glamour.

‘Maybe masking, pretending to be just like everyone else, is what it feels like to wear a Glamour’

With her cousin, Ramya does all that she can to save the Hidden Folk from the rumblings of a danger. She is driven, justice-seeking, accepting, and much wiser than many of the adults around her. Furthermore, Ramya is confident in her own abilities – this could be really empowering for kids who have a difference and struggle to celebrate themselves. Ramya isn’t just a leader in the story: she is a leader for generations of kids who will read about her.

‘I know I’m made just fine. They just need a bit of time to realise that as well.’

While Like A Charm has a satisfying ending, there is a promise for more, coming Spring 2023. And we couldn’t be more thrilled!

The Lightning Catcher by Clare Weze 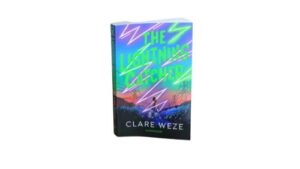 Another offering from February’s 8-11 book box. After moving somewhere new, Alfie turns to journal-recording as he embarks on a new adventure. He is naturally suspicious, a little reckless, and very, very determined. Alfie also thinks that he is slick – you can be the judge of that.

The family moved house because Alfie’s sister was being bullied at her last school, which caused her to become mentally unwell.  If your child does have teenage siblings, this book could be a useful tool for exploring how they feel about the teenage years have altered their sibling.

However, the main focus is this high energy adventure with his new best friend. It has a taste of Stranger Things, if that’s your vibe.

‘I’m an adventurer now; everyone wants a piece.’ 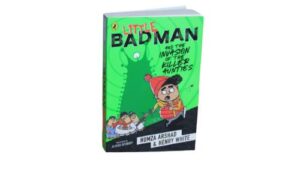 ‘But nothing, and I mean nothing, shaped me as much as my final year of primary school.’

This funny, chatty book gets going straightaway. Humza and his best friend Umer accidentally play a role in their teacher, Miss Crumble, getting stung by Mustafa the Bee. As she is allergic to bee stings, Miss Crumble ends up in hospital.  Humza’s auntie replaces Miss Crumble. And that’s not all…more and more teachers are absent because of an illness or accident, and all of them are replaced by local aunties.

Meanwhile, Humza is set on creating the greatest rap music video ever. This is a great contrast to his Pakistani Dad who worked incredibly hard to own two shops and five toilets. He starts filming in the boys’ toilets in primary school with Umer filming on a phone that is twice as old as both of them. Humza enlists his music teacher to help out too. But Humza spots a camera that will help take him to instant stardom. His mum says that she will pay for half of the camera if Humza looks after his old uncle after school; his dad offers to pay for the other half if Humza devotes himself to cricket. Quick-witted Huma feels almost overcome with embarrassment…

Something I Said by Ben Bailey Smith 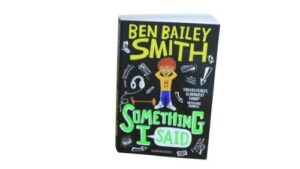 ‘I’m the go-to guy for chuckles’

Carmichael is the self-styled funniest guy in school. He is in the exclusive league of Oh My Days, Remember That Time? and is number one for Witty Comebacks to Bullies. This is a book for mini comedians but also for language lovers. Car has an interest in words and plays around with words like ambivalence and incongruous.

‘With a passion equal to how much I hate fractions, hypotenuses and carrying the three, I love the idiosyncrasies of grammar, the oddities of words that should rhyme but stubbornly refuse to…’

‘If you ever wondered what happens when a black woman from Grenada and a white man from Aberdeen have kids, well, the answer is there’s no answer’

Quite often, in stories, there is a quiet nerd and a funny kid. We rarely see stories busting stereotypes by a person being two things at once. But Something I Said directly demonstrates, and shows an appreciation for, the relationship between humour and words. This book will excite children into realising just how many futures a love of words can untap.

That is all from February’s 8-11 book box. Subscribe here to get your hands on more!