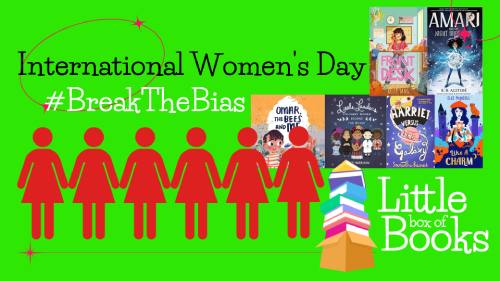 It is International Women’s Day! International Women’s Day (March 8) is a global day celebrating the social, economic, cultural, and political achievements of women. The day also marks a call to accelerate equality for women. It was first recognised by the UN in 1975 and is celebrated in more than 80 countries worldwide. On International Women’s Day, we celebrate the achievements of women, and empower the next generation to achieve even more. As a female-owned company, we recognise the importance of embracing all women have achieved. This year’s theme is #BreakTheBias. Breaking the bias means recognising and tackling bias in our schools, communities, and the workplace.

How to Get Your Child Excited About International Women’s Day

International Women’s Day is the perfect opportunity to give your child a history of feminism. School history can focus a little heavily on kings and wars, so take this chance to show your children (whatever their gender), the crucial role that women have had in shaping the world.

Less than a hundred years ago, in the Equal Franchise Act of 1928, women over the age of 21 were eligible to vote. This was through a fierce battle by the suffragettes. The suffragettes were ridiculed, ignored, and imprisoned for their pursuit of the vote. Furthermore, there are many countries in the world where it is still incredibly difficult for women to vote, as they cannot do things without male permission. Knowing this can help your child see that they should not take voting for granted.

Before The Gender Pay Act 1970, it was legal to pay women less for the same work as men – talk about the injustice of this with your children and how it impacts on attitudes to work even now.

Through the telling the stories of individual women, you can have a little window into history. Here are some of our favourites:

In 1955, Rosa Parks refused to give up her seat and go to the back of a segregated bus. This ignited the Montgomery Bus Boycott, which played a huge role in the Civil Rights Movement in America.

Hedy Lammar was an Austrian-American actress who invented the technology that would one day form the basis for today’s internet. Lammar struggled to be taken seriously as a scientist because of her background in the film industry.

Malala Yousafzai is a breath-taking advocate for the educational rights of women and girls. She was shot by the Taliban for refusing to be silent on the matter. She has since gone on to win the Nobel Peace Prize.

These are just three women worth celebrating but there are so many others from Maya Angelou to Jane Austen to Greta Thunberg. As well as women who have received international recognition for their achievements, encourage your child to celebrate those closer to home. Perhaps, they have an older sister who takes the time to listen to their problems. A grandmother who tells the most creative stories. Or a dependable best friend.

We can celebrate the achievements women have made whilst considering what we still must do for a gender equal world. This is a chance to discuss with our children how women are still seriously disadvantaged, both in this country and beyond.

In the marketing around International Women’s Day and the celebration of women, we often rally behind examples of ‘strong women’. This is after centuries of women being framed as the ‘weaker sex’. But let’s not be limited by women being framed as either strong or weak. Let’s have examples of women who were thoughtful, sensitive, audacious, and more. By reading books featuring varied female characters, your child learns that they truly can grow up to be whoever they want to be.

All award-winning author Elle McNicoll’s books feature complex neurodivergent female protagonists. She writes characters as three-dimensional as those that you would find in an adult’s book. Ramya, the protagonist of Like A Charm, is wise, confident, and persistent. She calls out injustice after injustice. She has a strong sense of self that does not alter, no matter how often those around her suggest that she should change.

For as long as she can remember, Aarti has been living on a Scottish island with her aunt. As a result, she is has a set of survival skills that are beyond most of us. She is also pensive and smart: two characteristics that enable her to work out how she got on the island in the first place, and how to get off.

Mia Yang is a Chinese immigrant living in America. The move is not all that her family hoped for. However, Mia has an unflappable optimism that spurs her on to making a difficult situation more manageable. She is creative and playful. She has strong love for her family.

Shiloh is a problem-solver. When she realises that she cannot sing like everybody else, she doesn’t let it get her down; instead, she turns her attention to rapping.

This book is for anyone and everyone who does not fit in. Frankie has wonderful friendship with her best friend Sam. Additionally, Frankie has incredible determination when she seeks out her biological father.

Sasha is a spirited girl who tells her dads that her clothes are not messy, they are just covered in adventures.

Sasha’s adventures are not stereotypical ‘girl’ activities. She has been playing in the dirt, go-karting, and saving goals in football.

International Women’s Day is for advocating for gender equality. It is a day for celebrating how far we have come whilst acknowledging how far we still have to go. It is also a chance to show the women in your life just how much you appreciate them.

We hope you have a wonderful International Women’s Day!