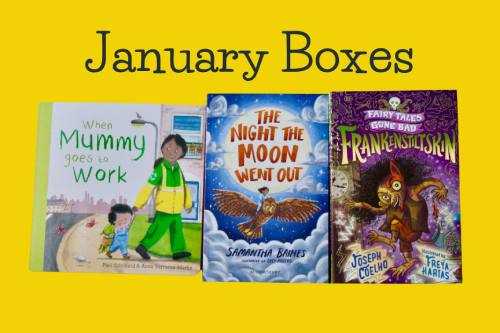 This is an all-you-need-to-know on our boxes this January. Even if you haven’t subscribed in time for January, we hope that these tasters will entice you to subscribe for the coming months. You can also follow our links to purchase any of the books individually if they particularly tickle your interest…

What January Has to Offer…

First up, let’s take a look at what to expect from our January boxes for the littlest of all…

A book with quirky illustrations about the day-to-day decisions we make. It doesn’t frame any choice as “good” or “bad”. Instead, it empowers the individual to feel that they can make them. The author-illustrator goes by her childhood nickname, Roozeboos. She emulates the natural curiosity of a child in her writing.

Sand Between My Toes

A day-trip to the beach is broken down to each sensory experience. The rhyme is simple, the illustrations are soft. This book makes you dream of an undemanding day out to the English seaside, in full anticipation of wind and rain as well as ‘fries and sauce, home of course.’

Pitching itself as “the ultimate ‘YES I CAN’” book, this story encourages children to try and try again. It is also a lesson in being a gentle, patient parent.

When Mummy Goes to Work

This sweet rhyming story reassures children that they are always on their parent’s minds. Not only this – but work is only temporary – Mummy will return! (Not in our book boxes but there is also When Daddy goes to Work)

Buy a subscription for a 0-3 year old in your life, here

And buy a one-off box for this age group, here

Next, this January, our 4-7 selection is truly wide range of reads… 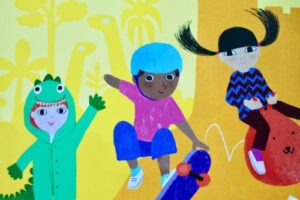 This book truly celebrates diversity. It encourages children to observe differences in a non-judgmental way. These differences come in the form of appearance, family set-up, imaginative play, and special occasions celebrated. The illustrations include children of a multitude of ethnicities. There is a child with a limb difference. A mother in a wheelchair holding her child on her lap. Many funky glasses. All the characters are presented with joy and eye-popping colour across the page. 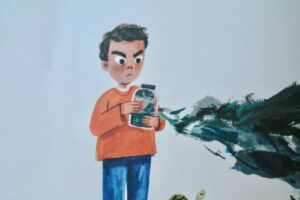 Storm in a Jar

This is a clever exploration into how grief manifests itself. When Arlo’s grandmother dies, he keeps the jar that she used to keep sweets in. At first, the sweet jar is a sentimental memento. As time passes, and sadness turns to anger, the sweet jar becomes a symbol for how Arlo is keeping his emotions bottled up. It is only through releasing the bottled-up emotions that Arlo comes to feel at peace with his grandmother’s passing. This is a great book for helping your child to understand death and the complex emotions that it can provoke.

The protagonist uses a hearing aid and it is incidental to the storyline.

We have interviewed the illustrator, Katie Cottle.

Songs for our Sons

This story gives children the confidence to be themselves and not succumb to the pressures to blend in with a crowd, ‘be a sequinned sparkler, a dynamic dazzler, a kaleidoscopic catcher’. Furthermore, it encourages children to see their emotions as valid and to be responsive to them. It also offers pacifist alternatives to protesting social justice issues, ‘a fearless truth-writer, a tender defender and a non-violent fighter’.

The Night the Moon Went Out

Aneira has a hearing aid on each ear: they have sparkly red moulds that sit inside her ears. Aneira’s hearing loss is incorporated into the narrative without it becoming the sole focus of the story. Author Samantha Baines wears hearing aids. We learn that that Aneria finds it difficult to concentrate when it is too noisy.

However, as Aneira’s hearing aids need to be charged, she cannot wear them at night. Without one of her senses at night, Aneira is afraid of the dark.

Accidentally, Aneira turns the moon off when she criticises it for not being bright enough to allay her fears of the dark.

Aneira is aided by a talking owl – Mrs O – in her mission to turn the moon back on.  Aneira is sceptical about assisting the owl: her mother has told her not to talk to strangers but has never mentioned owls. Despite not being able to hear well without her hearing aids, Aneira has the unique ability to understand every word the owl says!

This is an imaginative night-time adventure with a warm-hearted push to overcoming your fears.

If you are interested in more stories featuring hearing loss, check out our review of Megan Rix’s Lizzie & Lucky: The Mystery of the Stolen Treasure.

Get your subscription for the 4-7 year olds in your life here.

And one off boxes, here

From a spooky twist on a fairytale classic to a story featuring Hindu mythology, there is something for every 8–11-year-old in this January box…

The Land of Roar

Arthur and Rose are eleven, an awkward age that acts as the tipping point between childhood and teenagerhood. Rose feels that she has tipped over that threshold. She has a best friend in year 8. Her phone is her primary obsession. And playing is – supposedly – the last thing on her mind…

Arthur wishes more than anything that they could play Roar once more.  When they were younger, the twins invented Roar. Roar is an imaginative realm that is home to the likes of mermaid witches and wizard ninjas. The setting for Roar was their grandfather’s attic. When they are clearing out the attic, their grandfather is pulled into a folding bed and vanishes. Is he joking? Or is Roar…real?

This is wonderful book teaches children (and nearly not-children) that it is okay not to grow up too fast. It is a great fantasy, action-packed, gripping tale… 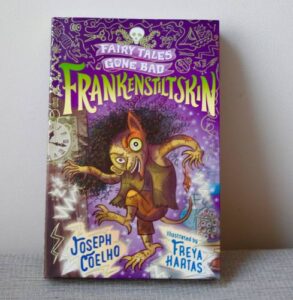 In the Prologue, the Librarian welcomes his ‘repulsive readers’ to read his collection of fairy-tales gone bad. This is author Joseph Coelho’s spooky twist on Rumpelstiltskin.

Expert taxidermist Bryony is renowned for her skill in stuffing dead animals. However, her father gets a little too creative with his language and makes out that Bryony has the power to bring the dead back to life! The King of Mythica misunderstands and takes Bryony away from her loving home with the view that she should bring his wolf back to life.

Emotional Bryony does not know what to until a small, unsightly creature appears. The creature strikes a deal with her: he will bring the wolf back from the dead in exchange for something. Bryony offers a lock of hair.

The wolf comes back to life!

Bryony thinks this means she can go home. But the King doesn’t stop at a wolf: he presents her with a polar bear next.

This is a brilliant first gothic text.

The Lion Above the Door

When we think about the Second World War, we all picture plucky young white British men out to save the world from the evil Nazis. The Lion Above the Door seeks to directly challenge this pervading image.

Leo and his class go on a school trip to the RAF museum. Although they are unlike, Leo is best friends with Sangeeta because they are the only two kids who look different in the class.

At the museum, all the white children find their own names and people who resemble them in the photographs from WWII. But for Leo and Sangeeta –

‘It was as if people who looked like us hadn’t existed on the planet at the time or had been invisible.’

This is until Leo finds his name – his exact name – commemorated: Leo Kai Lim.

Sangeeta finds her name ‘Singh’ commemorated too. The pair start to notice many names that are different to the ‘Williams’ and ‘Georges’ that they have already learnt about.

Leo manages to get the class to do an assembly on ‘Forgotten Heroes’ of the Second World War. Lion Above the Door does exactly that: it draws attention to the under-represented WWII stories.

Firstly, these stories are important because they are an inspiration to children. In this country, the Second World War is widely celebrated. All children should know of the heroic deeds of their ancestors. Furthermore, Sangeeta also draws attention to the role of women in the Second World War.

Secondly, there is significant xenophobia in this country. Repeatedly, Leo and Sangeeta are discriminated against by the other children in the class. They are made to feel as if they do not belong. Children realising that the UK has historically been multicultural and has had connections (oftentimes oppressive ones) to numerous countries could directly combat xenophobia.

This book is a critical accomplice for readdressing some of the absences in the history taught at school. 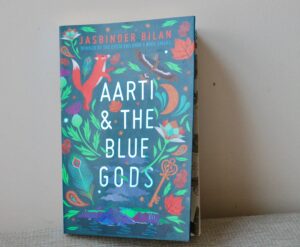 Orphaned Aarti lives alone on a Scottish island with her misanthropic Aunt. Aarti lives at the mercy of her Aunt’s unpredictable mood swings.

Naturally, Aarti has questions about where she came from – but  Aunt tells her to be grateful. But Aarti has queries. She wants to know if the whole world is as hateful as her Aunt makes it out to be. She daydreams about other people.

‘Each page had a beautiful painting of an incredible creature that seemed to be human but also strange.’

The book and her fox friend, Chand, are her respite. She also has a secret cave on the island that her Aunt knows nothing of.

Aarti & the Blue Gods is inspired by both Scottish and Indian mythologies, and the connections between them.

It unearths the power of nature –

This story is so captivating and allusive. The mystery at its heart makes it near-impossible to put down. You feel so much empathy for Aarti and the unique life that she has led.

This book is so beautiful that you may well want to nick it after your child has finished reading it.

That is all from January…

In conclusion, we hope you like the sound of our January book boxes. The team at Little Box of Books hand-selects the books for our boxes. We look for books that showcase the full breadth and depth of our world. January through to December, we seek to celebrate diversity.

Subscriptions for 8-11 year olds are here.  And one-off gift boxes are here.

Subscribe to our book boxes for February and beyond!