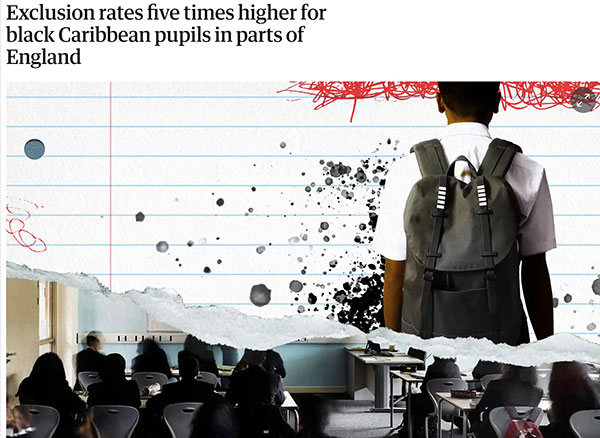 Last night the Guardian reported on the horrendous rate of school exclusion for children of black, Asian and minority ethnic origins.

Significantly, expelling children from school makes them more vulnerable to abuse. It impacts hugely on their ability to perform academically and socially. And when this happens to children who are already from marginalised and disadvantaged groups, it destroys their lives.

Above all, the education system is failing thousands of students.

And the worst thing about the report?  None of it is surprising.

A Gypsy mother, Esther, spoke about her son’s experience. Her son faced months of xenophilia. His retaliation resulted in his exclusion. Esther felt the school were not at all accommodating.

Furthermore, in this report from the Guardian, Naomi Bakare was only eight when she realised that she had to leave her school because of bullying. Her school ignored the racist bullying she endured.

Former professional cricket player turned teacher, Adrian Rollins, has described the racial abuse he has faced as a teacher. Although he is now a deputy headteacher at a school in Nottingham, he is one of the black males who have managed to reach such a senior role in education.

Why is this Happening?

There are, of course, a lot of reasons for these horrifying statistics:

Firstly, not all educational settings are knowledgeable about white privilege and unconscious bias. Consequently, the racist behaviour of some staff members goes unchecked.

There is a lack of diversity in the curriculum.

Brutal benefit reforms have pushed families below the poverty line, leaving them struggling to cope.

When schools become academies, they are under huge pressure to exceed performance expectations. Unfortunately, to do this, they end up excluding students. And there is a heavy focus on performance and league tables, contributing to pressure on staff.

What can we do to change things?

There are things we can do and organisations we can support who are making a huge difference.